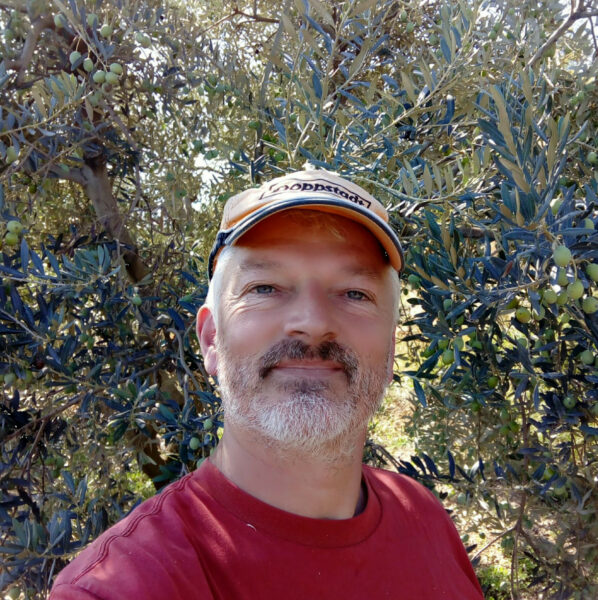 Nikos Pulos was born in 1963 in Krioneri, Corinthia, in the Greek Peloponnes.

After obtaining a degree in German Studies from the Free University of Berlin he went on to teach German and work as a translator and conference interpreter.

In the 1980’s and 1990’s Nikos Pulos worked in the Berlinische Galerie Museum of Modern Art, then located in the Martin Gropius Bau; the Adult Education Centre in Neukölln; and in the FILIA e.V. Youth Counselling and Community Centre. From 1992-2002 he was responsible for the organisation of the annual Greek Cinema Days held in Berlin. Since 2001 he has evaluated education projects on behalf of the European Commission and the Federal Institute for Vocational Training (BIBB) while continuing his activity as a freelance translator and conference interpreter.

The fascination with olive growing stems from Nikos Pulos’ early childhood. In 2002 he inherited from his father the overall responsibility for the family olive plantation in Greece. Since then this work has become a firm item in his daily schedule and an indispensable part of his philosophy of life.

He is the father of four daughters and divides his time between Germany, Greece and Italy.